Posted at 11:26h in Benefits, Taste improvement by olivier@ovm-communication.fr
Share 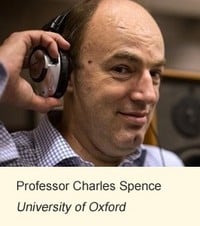 Professor Charles Spence is the Head of the Crossmodal Research Laboratory at the Department of Experimental Psychology at Oxford University, England. umami

Prof. Charles Spence is a cognitive neuroscientist who brings together people with different backgrounds such as marketers, designers, chefs, sensory scientists, composers and psychologists who are interested in utilising the latest insights from the field of neuroscience to help design products, services, environments, foods and packaging with a view to stimulating the senses of the consumer more effectively. Professor Spence and his team study how we perceive and experience foods and drinks and ultimately, how the senses interact to form our perception of flavor. EURASYP interviewed Professor Spence on the fifth basic taste, which is also provided by the natural* ingredient yeast extract – umami.

Professor Spence, did you find an explanation in the end for people’s preference for tomato juice in the air?

Well, it turns out that the umami taste, as it appears e.g. in tomato juice, is not impacted by loud background noise. That means that a Bloody Mary, for example, actually retains its full taste and flavour in the air and thus makes all foods that are rich in umami more palatable. In contrast, sweetness and, to a lesser extent, saltiness both show suppression – i.e., it is harder to perceive these tastes when there is loud noise playing in the background. As yet, we don’t know quite why it should be so special, but researchers are currently trying to unravel the underlying neurological story here. So to a certain extent, yes, we are well on the way to finding one of the determinants of people’s preference for the taste of tomato juice aboard: because it is a more robust taste in comparison to lemonade, for example.

Can you explain how umami differs from the other basic tastes regarding its taste profile?

Not all basic tastes behave similarly; when it comes to the suppression of tastes, for instance, combining sweet, sour, salty and bitter tends to lead to an overall suppression of the individual taste. Umami, however, is immune to this effect. There is even some evidence to suggest that it fails to show the suppression effect and may actually boost our perception of some of the other basic tastes.

So, is it correct to assume that umami is not simply a nice taste but is essentially the only basic taste that seems to be able to “work together” with the other basic tastes to add to the overall taste of a dish?

Yes indeed. It is a very interesting and special taste, one that seems to be interestingly different from other basic tastes we know about so far.

What do you think, why does umami seem to be immune to the suppression of taste?

Since the umami taste indicates the presence of protein in foods this could actually serve as one explanation. During evolution, proteins were always an essential and valuable component of a healthy diet.

What color do people associate with umami?

Unfortunately, we have not yet done a systematic study of the exact colour of umami so it is hard to answer. Part of the problem is that many people in the west still tend to be unfamiliar with the notion of umami as a basic taste. So a survey would most likely not be very successful at this stage. However, things are slowly starting to change and we certainly hope to isolate the colour that people associate with umami in our future research – once umami is more popular within western societies.

Why are western societies not as aware of umami as people in Japan, for example, where umami is much more appreciated?

It is indeed an interesting question that could also be answered in an almost philosophical way, getting at the question of what ‘basic tastes’ are and whether there really are ‘basic tastes’. These perceptions are in fact very different all around the world resulting in a very different understanding of tastes themselves. Also, the fact that we didn’t have a name for it in the west probably impeded its progress. I remember I first heard about umami at a conference way back in the late 1990s. However, a growing number of western chefs, food companies and providers are starting to pick up on it. It is sure to become more familiar here in the west over the next few years. The very fact that there has been increasing globalisation has also certainly added to the exchange of cultural and nutritional habits. Increasing interest in new tastes and foreign foods comes naturally with this. Besides, people are currently also interested in other tastes such as kokumi (distinct mouthfeel, persistent taste spectrum, author’s note) and even metallic as a basic taste. Some scientists think there may be as many as over 20 basic tastes. A lot is yet to be discovered.

What does umami offer in comparison to the other 4 more established basic tastes? Why do we need umami?

Our sensitivity to each and every taste has evolved for a reason. In the case of umami, it signals something essential for our diet – the presence of proteins, just as ‘sweet’ indicates ‘rich in energy’ and ‘bitter’ indicates ‘toxic’. Proteins are vital for processes such as digestion, metabolism, the transportation of nutrients and oxygen to the blood as well as the production of antibodies, so they take on essential functions in our bodies. The umami taste indicates their presence in a food and is therefore very beneficial.

Thank you very much for this very enlightening interview, Professor Spence. We may come back to you once you have discovered which colour we can associate with umami !

From YeastExtractInfo
*according to ISO TS19657