You should cook with Marmite yeast extract

Home > Benefits  > You should cook with Marmite yeast extract

14 Jun You should cook with Marmite yeast extract

Posted at 04:00h in Benefits, Taste improvement by olivier@ovm-communication.fr
Share 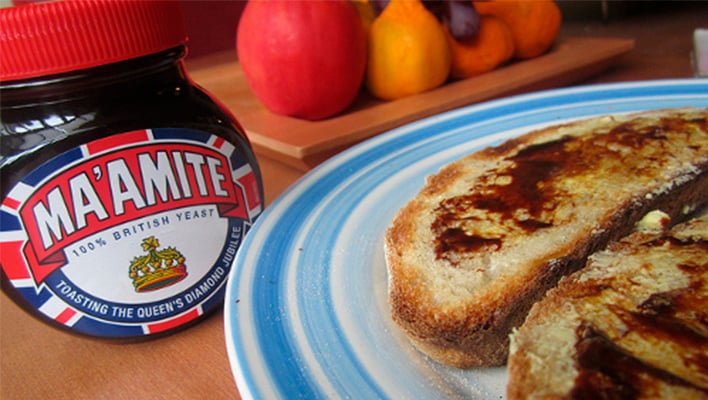 If you’re a follower of food media, you may have noticed a recent uptick in the number of times you’ve heard about Marmite. It is also known as a mysterious brown condiment the Brits eat on toast. That’s because of Kenji Lopéz-Alt of the website Serious Eats. Indeed, he is evangelizing the stuff on tour for his new book, The Food Lab. He presents it as one of the all-time greatest “umami bombs” you can keep in your kitchen cabinet. Unlike anchovies or fish sauce, it’s 100 percent vegan.

Marmite and its nearly interchangeable Australian sister, Vegemite, are essentially yeast proteins, byproducts of the alcohol industry. If that sounds pretty gross to you, you’re not alone. Salty, savory, and enormously potent, one smear of the paste is enough to send most unacclimated palates running. The UK company has long poked fun at its own divisive flavor with the tagline “Love it or hate it”. Now, it is with a tongue-in-cheek campaign to end #marmiteneglect. Lopéz-Alt admits that the paste is an acquired taste eaten on its own. However, he recommends pairing it with other umami-rich ingredients. The objective is to maximize impact and minimize the likelihood that a single source of flavor will overpower a dish.

Could Lopéz-Alt usher in an American Marmite revolution? Indeed, the rest of the English-speaking world has been harnessing the power of yeast extract for more than a century, both in cooking and as a dietary supplement. Beginning in the 1920s and 30s, it was given to pregnant women as a powerful source of folate and to prevent anemia. Marmite and Vegemite were included in the ration packs of British and Australian soldiers during WWII to keep “fighting men fighting fit.” Today, the NHS recommends Marmite as a good source of B12 for individuals on a vegetarian diet, who don’t regularly absorb the vitamin from animal foods. Its high B-vitamin content has even led to the widespread myth that regular consumption will ward off mosquitoes.

Unless you’re planning to hunker down to a hot cup of Marmite, that nutritional kick will likely be a fringe benefit to the condiment’s instant flavor-boosting properties. Like any umami-rich ingredient, the thick brown paste lends a savory, full, “meaty” taste to drab dishes. Vegan-friendly foods and condiments that are high in glutamates all have the power to add savory oomph to cooking. For instance there are: kombu, tomatoes and tomato juice, umeboshi paste, miso, and mushrooms. However, keeping a jar of Marmite in your pantry is a great safeguard for those moments when your soup, stew, or roast needs a boost. It is also useful when anchovies or parmesan just won’t cut it (or aren’t on hand). Marmite even offer Marmite-laced recipes on it website.